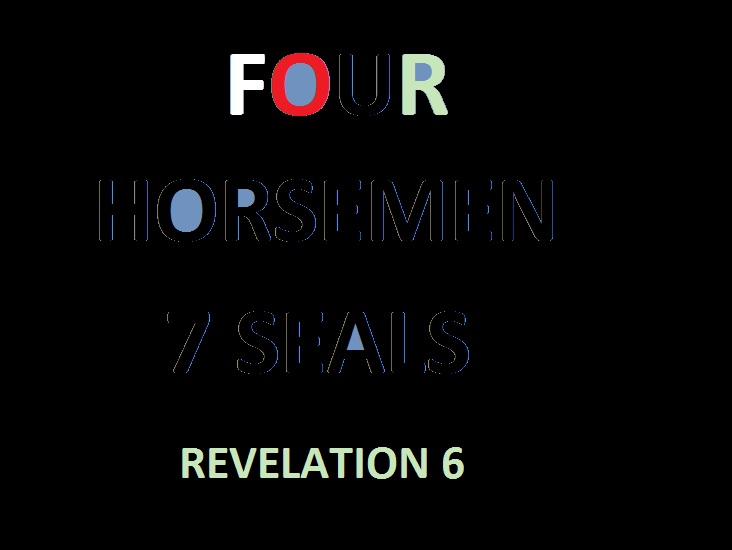 Sunday night we started off with prayer and a review where we left off 2 weeks before. It was good to get back to the study and I just wanted to say thanks to all those that attended. Remember anyone and everyone is welcome to come and take apart of this study. we have people from several different churches that don’t have evening services attending. Just wanted to thank you to Dongola First for allowing this to be taught at their location.

Sunday night found us first talking about the 7 Feast (or appointed times)that are found in Leviticus 23. I found it good to first address them since we had been talking a lot about the Rapture before proceeding on to the 4 Horsemen. The 7 feast were lined up with certain days according to the Hebrew Calendar of the 360 day year. These were times that were established by God for certain things to happen during the year. Though time does not permit me to list all the details here I do recommend you read up on them.

At the bottom of this article is a good place to start. Be sure to explore gotQuestions.org for other information….pretty good stuff

We then moved on to the 4 Horsemen. Rev. 6 gives us a picture of what the church will see from the balcony’s of heaven while the 7 year Tribulation is beginning on this Earth.

We start off by seeing Jesus (The Lamb of God) breaking the first of 7 Seals of the Scroll.

The 1st Seal…. The false Christ
The white horse refers to a world leader rising up which is the antichrist. He is given a crown of authority(not earned it)and he carries a bow(no arrows) which means he will conqueror peacefully after the Christians are removed from this earth. He will lead with great deception according to 2 Thessalonians 2. He will have all the answers that people want to hear and he will become the first world leader since Roman times.

The 2nd Seal….War
The Red horse is unleashed during this time of false peace and is given the power to take peace from the earth. He is given a great Sword. Men will kill each other. Nations will fight against nations, races of people will fight against other races and many will die.

The 3rd Seal…Famine
The Black horse is given the power to destroy the world economy. He is caring a set of scales winch is a sign of commerce and trade. Their world Government with out God will begin to fall apart and many will die. Notice the cost of wheat and barley. 1 qt of Wheat for a Denarius …3 qt of Barley for a Denarius Wheat is what bread is made out of and barley is used for animal feed. A denarius was equal to a days wage. so in other words it will take a days wage to buy a qt of wheat feed your family some bread for a day …that leave no money for clothes cars playthings rent healthcare etc.
People will resort to buy the animal food to survive after the world economy collapses. Most people will die of starvation. People will be killing other people for food. Notice something else….Don’t hurt the wine or the oil. those are luxury items. which means the rich will still have plenty.

The Pale horse will bring a massive amount of death to this earth. 1/4 (possibly 2 Billion people)of the population will die. He will bring with him Hades(Hell). He will harvest the souls of those who have choose to reject God and fuel the fires of Hell with those people. He will use the sword, famine, and terrible diseases(which all ways follows war)and the wild animals will be so hungry they will kill people to punish all who have rejected Jesus Christ. What a terrible thing that will happen.

During this time the Bible says that those who give their life to the Lord during this time they would be killed by the people of the earth because of their testimony and faith in Jesus. They will blame these believers for all this trouble.They are know as the martyrs.

The Bible says when the 5th seal is broken that all those that had been killed for their faith in Jesus Christ were crying out from under the Altar of God. They were not praying for the ones that had killed them for their forgiveness like Jesus has taught us to do.(pray for our enemy’s)They were crying out for God for Him to avenge their blood. They were put to death by even their love ones(Mark 13:12,13)they now saw sin the way God sees Sin and they were now in His Holy Presence and God gave them white robes and told to wait until their number had been fulfilled. That tells us that many more people would be martyred for their faith in God during this terrible time.

When this seal is opened God is going to shake this earth by its core and people will then see a glimpse of God’s Great Power. there will be a great earthquake, the sun will grow black the moon will turn to blood(possibly the cause of a great nuclear war with dust and debris thrown into the air blocking out the sun) the sky will recede like a scroll whether by Gods direct hand or the cause of 100’s of bombs ripping the fabric of space and time. I don’t know for sure but one thing is for sure…Everyone from the highest to the lowest are going to be terrified.

Listen…..Right now you have a chance to ask for forgiveness of your sins and have salvation through Jesus Christ. It is easy now. If you choose not to, and decide to wait and see it this is for real or not. (which Gods Word is 100% true)Then this is where you will find your self in the near future. Then again you could die at any given sec of the day and never get another chance to ask God to come into your life. Salvation is a free gift of God for trusting in Jesus right now. During that time it will still be a free gift …. but you WILL go through all of these things these horrors of evil people wanting to kill you and more than likely you will die for your faith in Him. Give your life to Him today.

Folks we are just now getting to the meat of this study….Come Join us

Check out this link below…..they also have a lot of great answers to a lot of tough questions. Remember though …only the Bible has all the correct answers.